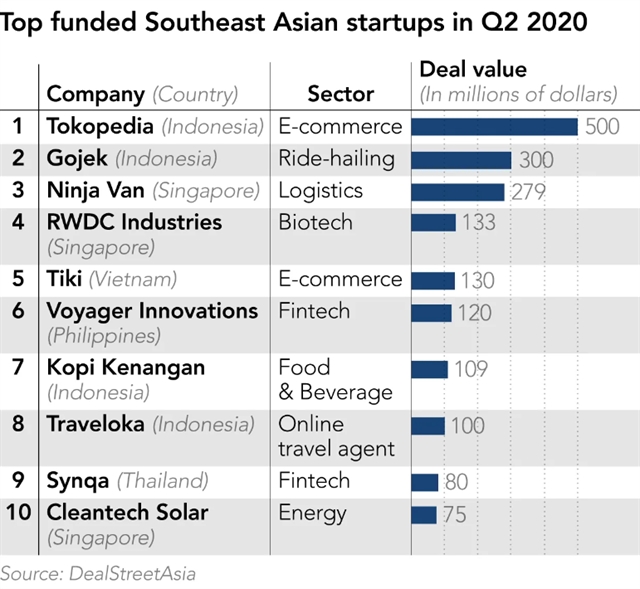 Investment in startups in Southeast Asia spiked in the second quarter of this year despite the COVID-19 pandemic, led by e-commerce and fintech companies.

Data from Singapore-based startup information platform DealStreetAsia shows that the worth of fundraising contracts in Southeast Asia increased 91% within the year to $ 2.7 billion in QII/2020, while the transaction volume increased by 59% 184 over the same period last year.

Of these, Indonesia topped in deal value, accounting for 45.6 percent. Singapore ranked second, followed by Vietnam, the Philippines, and Myanmar.

E-commerce topped the charts by raising $ 691 million, followed by logistics with $ 360 million and fintech at $ 496 million.

The growing demand for online shopping in Southeast Asia has also heated logistics and delivery.

Fintech is also on the rise and Voyager Innovations, the company behind the mobile payment app Philippines Paymaya, raised $ 120 million in April. Vietnam is expected to witness a new wave of energy investment, making it increasingly attractive to investors who have proposed removing some of the barriers hitting them.

A series of tens of billions of dollars worth of energy development MoU was signed the week before Vietnam’s Energy Summit, reinforcing investor confidence in the potential country that has not been tapped on the market.

Vietnam is trying to attract more private sector in energy to meet high fuel demand for economic development, as well as strong commitments to reduce CO2 emissions. According to estimates by the World Bank, it is estimated that in order to achieve this, the country will need to invest about 10 billion dollars annually loaded before 2030, higher than the average of 8 billion dollars over the period. 2011-2015, according to the World Bank.

Vietnam attracted US $ 3.15 billion of foreign direct investment (FDI) and capital to buy shares in July, up 79.8% over the same period last year and 76.2% compared to June, the newspaper reported. Report by the Foreign Investment Agency (FIA) of the Ministry of Planning and Investment.

Ninety-three current projects have increased their registered capital to a total of 992 million USD, twice as much as the same period in 2019. Foreign investors spent nearly 1.13 billion USD to buy shares in 334 The project is 2.8 times higher than in July 2019.

The agency believes that the COVID-19 pandemic is considering attracting FDI during this period but also creates a significant opportunity for Vietnam to capture capital flows due to the global movement of the value chain and land. improve the water investment environment and infrastructure system.

The recent European Business Climate Index survey office in Vietnam shows that European business leaders are very active in the country’s business and investment environment, with about half predicting that the climate Vietnam’s macroeconomy will be stable and improve in the next quarter.

Vietnam aims to attract US $ 35-36 billion in FDI this year.

The EU-Vietnam Trade Agreement (EVFTA) is predicted to launch a replacement wave of trade and investment if Vietnam continues to strengthen the business environment and complete the legal framework on trade and The investment, experts said on July 28 in HCM City.

Expected to take effect in August, the trade agreement will open more opportunities for Vietnam’s exports to the EU, one of the largest and most lucrative markets in the world.

With a population of over 500 million and a combined GDP of more than US $ 15 trillion, accounting for 22% of world GDP, the EU is the world’s largest exporter and importer with annual trade of US $ 3.8 trillion.

As economies around the world struggle with the impact of the COVID-19 pandemic, EVFTA will offer Vietnam the opportunity to attract more FDI from European businesses seeking an open, competitive market. and business-friendly.

The country, especially Ho Chi Minh City, is trying to maintain the macroeconomy by resuming business activities to realize its dual goals of fighting pandemic and restoring the economy.

Most of the EU has been an important economic partner of Ho Chi Minh City for many years. This is the third-largest export market, only after China and the US. The trade deal is expected to boost the city’s exports to the EU.