Vietnam registered a trade surplus of US $ 170 million in the first half of June, bringing the total surplus in mid-June to US $ 3.75 billion.

Maintaining the trade surplus is one of the remarkable achievements of the country’s import and export activities in the difficult context of the COVID-19 pandemic.
Accordingly, from June 1 to June 15, Vietnam’s trade turnover reached US $ 20.57 billion, up 3.3% (equivalent to US $ 651 million) compared to the second half of May, with export sales of reached 10.37 billion USD, down 5.3%. 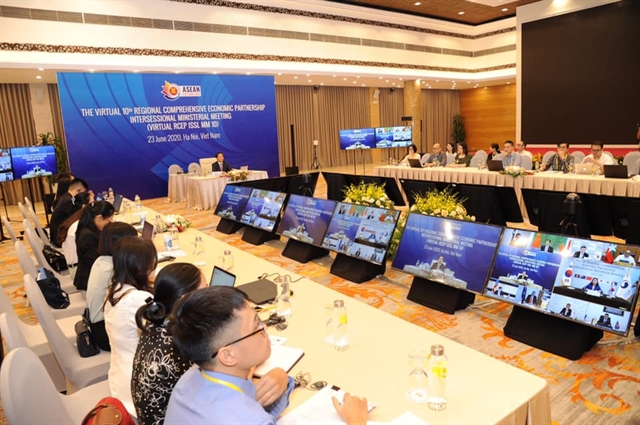 Vietnam has worked closely with ASEAN and its six partner countries to promote the early conclusion of full negotiations on the RCEP agreement and preparation for signing in November.

If signed, the RCEP agreement will create one of the world’s largest economic bloc, as 16 countries together account for about 45% of the global population and more than 30% of the world’s gross domestic product.

Vietnam has attracted 335 foreign direct investment (FDI) projects in industrial parks (IPs) and economic zones (EZs), with newly and additionally registered capital of US $ 6 billion in the first half of the year. , according to the Ministry of Planning and Investment (MPI).

By the end of June, 336 industrial parks have been established in Vietnam, covering a total area of ​​98,000 ha, according to data compiled by MPI.
Of the 57 cities and provinces that received foreign investment in the first half of the year, Bac Lieu attracted the largest part of the capital commitments with US $ 4 billion, or 25.5% of the total.

MPI reports that the number of FDI projects as of June is about 9,835 capital with about 197.8 billion USD, of which about 72.3% has been disbursed.

Regarding domestic investment projects, both IPs and EZs in the country have attracted about 282 projects in six months with total newly registered and increased capital of US $ 2.7 billion.

They brought the cumulative amount of domestic investment projects to 9,650, with a total investment of about US $ 99.6 million with disbursed investment accounting for 46.3%.

How to invest in Vietnam – Taxation

How to invest in Vietnam – Labor Regime

If you process any product from Vietnam, you are probably familiar with the Lunar New Year (LNY)....

What foreign investors should know when invest in Vietnam?

We summarize in this article essential information for foreign investors who want to make an...